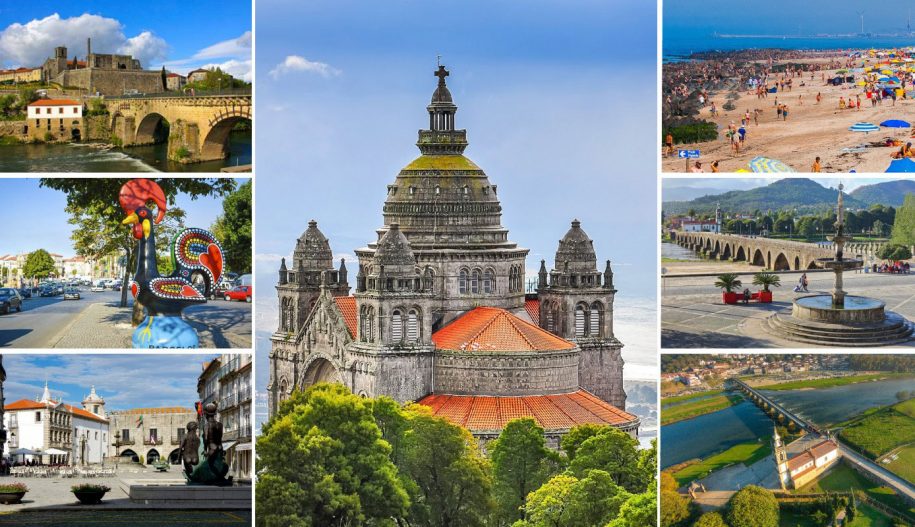 Alto Minho is one of the most remarkable regions of Portugal, with a rich and complex landscape where tradition and nature are respected. Located in the very north of the country, where Portugal was once born, this region has both the sea and mountains to offer.  The region stretches from beaches with distant horizons and coastal villages of fishing origin, to the mountains of unique fauna and flora, with the Peneda-Gerês National Park as its major reference.

There, life flows and flourishes with the refreshing rivers that flow down the mountains. Besides the River Minho, a border river, (one of the most remarkable rivers in the area, rising in Galicia and carving its way through Minho until it flows into the Atlantic) it also has the River Lima, which gives its name to the oldest town of Portugal: Ponte de Lima.  Legend has it that the river owes its name to the Greek word Lethes, (which means oblivion) and during the Roman invasions the soldiers were said to hesitate crossing it for fear of losing their memory and identity.  The town is one of the best examples of heritage conservation of Alto Minho and one of the driving forces of the region and of the Minho culture.  The green of the fields and the landscapes dominates this zone, and that main gastronomic delicacies are vinho verde wine and caldo verde soup. This singular territory has one of the most interesting national cuisines, ranging from cod cakes and the Gomes de Sá cod dish, to cabidela rice or sarrabulho (made from poultry of mixed meats and animal blood), sável (fish) and lamprey de escabeche, Minho-style meat and potato stew or pork stewed in lard, in addition to confectionery and desserts, of which the rabanadas and the mexidos de Natal stand out.

Minho has in its people its greatest wealth. The people are proud of the greatness of their cultural and immaterial heritage, habits and customs. The traditional and artistic heart of Viana, (filigree worked jewellery) symbolizes all the richness of this culture. It is not surprising, therefore, that during the street pilgrimages, women’s costumes exhibit their joy through the brightest and most diverse colours and that Minho folklore is an expression of this genuineness.

Comments are closed.
This site uses cookies. By "Accept ", you consent to its use. Read more AcceptReject
Privacidade & Cookies

This website uses cookies to improve your experience while you navigate through the website. Out of these cookies, the cookies that are categorized as necessary are stored on your browser as they are essential for the working of basic functionalities of the website. We also use third-party cookies that help us analyze and understand how you use this website. These cookies will be stored in your browser only with your consent. You also have the option to opt-out of these cookies. But opting out of some of these cookies may have an effect on your browsing experience.
Necessary Always Enabled
Necessary cookies are absolutely essential for the website to function properly. This category only includes cookies that ensures basic functionalities and security features of the website. These cookies do not store any personal information.
Non-necessary
Any cookies that may not be particularly necessary for the website to function and is used specifically to collect user personal data via analytics, ads, other embedded contents are termed as non-necessary cookies. It is mandatory to procure user consent prior to running these cookies on your website.
SAVE & ACCEPT